BUY DVD FROM AMAZON (CANADA ONLY)

Equal Marriage is now a right being sought after globally. Canada has been a leading example of the benefits of this equality for the past eight years. This documentary is an in depth look at how same-sex marriage in Canada became a federal law and what Canadians thought along the way. “I DO? (a documentary profiling same-sex marriage as it becomes legalized in Canada)”

“I Do? (a documentary profiling same-sex marriage as it becomes legalized in Canada)” had its world premiere at the New York International Independent Film and Video Festival, where it received an award for Best Gay Film. Canada has been on the forefront of positive change for Equal Marriage since The Civil Marriage Act was introduced by Prime Minister Paul Martin’s Liberal minority government in the Canadian House of Commons on February 1, 2005 as Bill C-38. This film interviews Rev. Dr. Brent Hawkes who devised the successful political marriage strategy in Canada. Canadian Lawyer Douglas Elliott who won the battle in the Canadian courts and activists Kevin Bourassa & Joe Varnell, the first same-sex couple to ever be legally married anywhere in the world. Whether you’re a Canadian who wants to know “How Equal Marriage was born in your country” or your Country is currently fighting for these same rights, “I Do?” is a intimate look into the history of Equal Marriage.

SYNOPSIS: The controversy over allowing the homosexual population to marry has sparked many debates in Canada and around the world. On July 19th 2005 the Senate passed the equal marriage bill C-38 by 47 to 21. On July 20th at 4:56 p.m. the bill received Royal Assent and was proclaimed into law at 6:09 p.m. Canadians can now marry in every jurisdiction. This documentary explores the views of many gay people and their supporters, in the mission to discover what it is exactly that the queer population thinks about same-sex marriage. As well as to educate the general public about the issue from the opinions of the people who it affects most. Having started filming before it was a federal law the film “I Do? shows the progression of the events as they unfold and dares to go head on with a topic being hushed in the media at the time. Featuring: Rev. Dr. Cheri Dinovo, Douglas Elliott, Rev, Dr. Brent Hawkes, Marilyn Churley, Kevin Bourassa, Joe Varnell, Gail Donnelly, Barbara McDowall, Susan Gapka & Mitchel Raphael. 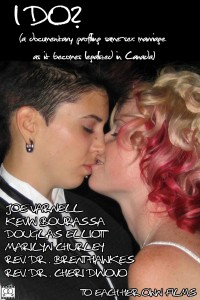 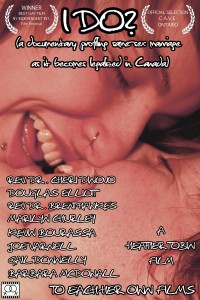